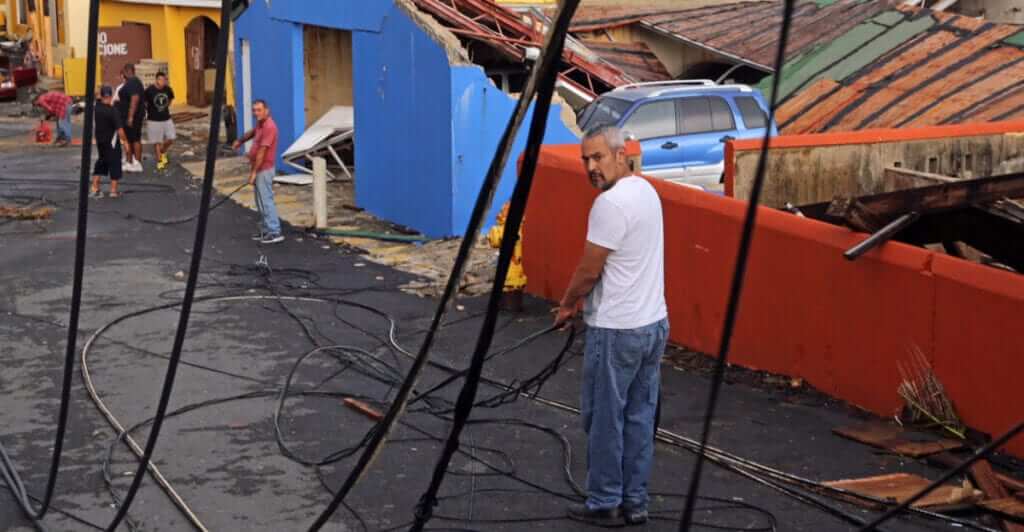 This Technology Could Help Avert Electricity Crises Like Puerto Rico’s After Hurricane Maria.

As major storms and potential terrorism have made America aware of the vulnerability and critical nature of our electric infrastructure (think Puerto Rico post-Hurricane Maria), new ideas are needed to better protect this essential part of our overall critical infrastructure systems and to repair it more quickly when it does get hit.

Awhile back, I wrote about a technology that could detect incoming lightning strikes with enough warning time to get exposed people to safety.

The NIMBUS® technology detects very low frequency magnetic signals that are generated by thunderstorms, hurricanes, and other severe weather.

In its basic form, the NIMBUS® 4D handheld detector could allow attendees of outside public events (ballgames, camps, concerts, etc.) to be moved to shelter before anyone was hurt.

Applied in different forms and to larger scales, the Nimbus technology could enhance our ability to detect and provide critical warning about thunderstorms, tornadoes, and hurricanes. The same base technology also could be modified to “see” small drones approaching facilities with possible hostile intent, with enough time to take counter measures.

All this remains on the cutting edge, but many experts contacted me (and Entropy Technology Design, the designers of Nimbus) and said, “Great stuff, but it is still a ‘nice-to-have’ tech capability.” But memorably heavy storms in recent years may enable this technology to make the leap to the status of a necessity.

The devastation wrought by big storms is always a tragedy, but in some cases it is catastrophic. A regular thunderstorm can knock out dozens to hundreds of neighborhood electrical transformers. Bigger storms (hurricanes, tornadoes, squall lines) can take that number into the thousands. The island of Puerto Rico lost nearly everything.

What if the good guys could “read” the storms before they hit and were able to power down the transformers (and other electric transmission infrastructure) in the likely target area? What if they could do it seconds before the storm hits and causes an electronic surge or flips their fuses? The transformers then could be turned back on without problem as soon as the storm passes.

And what about the transformers that do get hit and damaged?

You can use the same technology to locate the specific transformers that need physical repair versus mere reset. A huge portion of the recovery time after a major storm is spent in going from transformer to transformer to see which are broken and which just need their fuses flipped.

This may sound like wishful thinking, but it actually is achievable today and Entropy also is focused on this.

Infrastructure mapping has become a critical part of the development of the Internet of Things—the network of physical devices, vehicles, home appliances, and other items embedded with software, sensors, and connectivity that enables them to connect and exchange data—and the goal of smart cities.

Smart cities seek to use the Internet of Things to provide a detailed, real-time data web that can be used by the city infrastructure to make critical decisions quickly, safely, and seamlessly. The same logic that will allow your refrigerator to tell you to buy milk as you drive by the grocery store can be used to take important city equipment off-line before it’s damaged by a thunderstorm.

In both examples, the data is real and delivered exactly where it’s needed in time to make a quality-of-life decision.

But cities can’t become truly smart until the very real threat from dangerous weather is made a part of the moment-to-moment database used to make decisions.

The Nimbus technology represents one way to add this important weather data into the planning and reaction capability of a smart city. Because the Nimbus was designed to be small and portable, it’s easily mounted on commercially available drones of the sort that are owned and operated by lots of folks today. That new concept can be used in several ways that feed on each other to provide a comprehensive system.

The first step is to “map” the electric transmission infrastructure, in particular the unique “fingerprint” of the radiated magnetic field produced by the different parts of the system (major transmission line towers, normal power poles, and neighborhood transformers). There are an enormous number of miles of these systems, but by using multiple low-cost drones, this can be done fairly quickly.

Once this map of “normal” is obtained, you have a baseline heartbeat of the city, town, or infrastructure that tells what the system looks like when in normal operation. As a storm approaches, operators use the Nimbus Base Station (provides more range and thus warning) in its original mode to determine the storm’s likely specific target area and use this information to preemptively shut down key elements seconds before the hit, and to restart it as the storm passes.

This alone would limit the damage to a point far below the norm for a major event. You don’t need to shut down an entire system for hours, or lose it for weeks when you truly can limit the shutdown to seconds (perfect for critical systems) and keep the damage to a minimum.

The final piece is sending out the same drone fleet after the storm to find the specific transformers or towers that no longer “match” the baseline. This pinpoints which should be prioritized for repair, which will allow it to be accomplished with fewer repair assets and eliminate the need for checking every individual device in the effected area.

This is a classic example of the out-of-the-box thinking we need today. By using a linked technology in different manners to accomplish multiple tasks, you save money, space, and training. Can any community or power provider afford to not invest in this kind of capability?

Nimbus may have been a cool, added safety device before, but this wider application is absolutely needed today. No one could have foreseen how brittle the critical infrastructure of Puerto Rico had become. Hurricane Maria simply destroyed it.

The American people have stated clearly they think the recovery operation is too slow, despite the Herculean efforts being made. We must do better as a society, and the goals and visions of the Internet of Things and smart cities as a driver can help us accomplish this.

Today there is a choice. Deployment of technologies such as Nimbus can map our infrastructure systems, identify a storm’s target, guide mitigating actions to minimize damage (and downtime), and finally triage the recovery effort. Every step gets citizens back up and on the grid faster and more effectively.

All together, this means less suffering and less cost. The investment is small compared to the savings.

Why are we waiting?